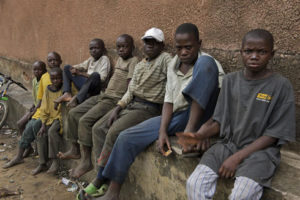 I was in Uganda with my then ten-year-old daughter. It was our first time there, and I was still very much “in my bubble.” We were headed—with Robert—to coffee farms on the Kenyan border, and we had stopped midway for lunch in the history-rich town of Jinja, which also happens to be the somewhat disputed source of the Nile (Rwandans say it’s in Rwanda).

As soon as Robert got up to use the restroom, a group of “street kids” began gathering around the perimeter of the open-air restaurant, speaking in their native Luganda to a Ugandan couple in the corner, presumably asking for money or food. The Ugandan couple didn’t appear to appreciate having their lunch interrupted, and they spoke back, somewhat aggressively, presumably saying no. The kids—all boys—didn’t seem to like the given response and threw a glass soda bottle into the restaurant to ensure that their displeasure didn’t go unnoticed. The Ugandan couple stood up and began shouting at the boys. The boys shouted back. Terrified of what might happen next, I shielded my daughter from the perceived threat. Shockingly, until that moment, I had never—in my entire life—witnessed any kind of public altercation involving adults.

How’s that for privilege?

Robert returned from the restroom and immediately walked over to the boys. He was calm and friendly. He looked at them and said, “What’s going on guys? You hungry?” The boys nodded. Of course they were hungry. He asked all of us to follow him to his truck parked alongside the road. The boys and my daughter and I followed him.

One of the boy’s ears had an open wound that had become infected. Robert got a first-aid kit from the back of his truck and proceeded to clean the boy’s ear and apply an antibiotic ointment and bandage. While Robert was running his makeshift triage, my daughter and I sat on the curb with several of the other boys. One of them started talking to my daughter. As they spoke, I noticed how young they were; some had to have been no older than eleven. What could I have possibly been afraid of? Was it the combination of their tattered clothes and dark skin? Would I have been as afraid if they had been white? Honestly, I don’t know the answer to that question.

What I do know for certain is that I was afraid of them because I did not understand them. Having never been a “street kid,” nor having ever lived in close proximity to extreme poverty at any point in my life, my only knowledge of street kids was based on what I had read in books or seen on the news. The story of poverty, addiction, and desperation was the only story I knew. But of course, the children I met that day are not one-dimensional. Their histories and identities are just as complex as my own and their humanity just as precious. I feared them because I couldn’t relate to them; I couldn’t see myself in them. My perception of those boys was based entirely on a single story.

In her 2009 TED Talk, the Nigerian writer Chimamanda Ngozi Adichie talks about the danger of judging people based on a single story. “The consequence of the single story is this—it robs people of dignity, it makes our recognition of an equal humanity difficult, it emphasizes how we are different rather than how we are similar.”

Robert has been in Uganda for thirteen years; he knew that the boys’ lives consisted of more than a single story. He could see past their “tough” facade—a necessity of fending for yourself on the streets when you’re eleven, I suppose—to the hopes and dreams of young boys anywhere in the world. He could see himself.

In Uganda, as in the U.S. and every other country in the world, people turn their backs on suffering every day. We do this by differentiating ourselves from those who are suffering. In a way, it’s a form of self-defense; if we acknowledged our shared humanity, their suffering would be our suffering. For many people, this is simply too much to bear.

But the most compassionate among us know that there is a better way. Compassion is the ability to see yourself in the suffering of another. By helping those boys, Robert also helped himself. When we act compassionately—toward other people, animals, insects, and the environment—our actions are just as healing to ourselves. Acting with compassion fortifies the entire being—mind, body, and soul. When I sat and talked to those boys that day, I didn’t yet understand this concept. But I did know that something had changed in me, something that would stick with me for the rest of my life.

Opening of the Amaanyi Center