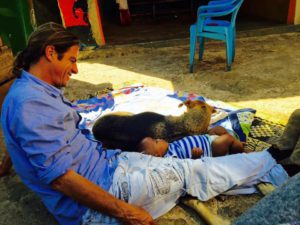 There is this misconception about people doing humanitarian or social justice work: that they are saints who never mess up, who have exchanged freedom for helping others. But that is not at all the reality I have come to know. Instead, I see complicated, fascinating people who, rather than giving up freedom, have chosen a life of total freedom, and lots of hard work. Malayaka House’s founder, Robert Fleming, is no exception.

Last year, when my family and I were in Uganda for a few months, I was having a cup of coffee and a cigarette with Robert on the porch of our rental house. He was telling me that when he found Sara in labor and took her to the hospital to deliver the baby, he had been wanting to do something meaningful with his life for a long time. He had spent years going back and forth to India and volunteering in Mother Teresa’s homes, always returning to Vermont to teach tennis in fancy clubs and live his easy life; he was beginning to feel like a charlatan.

Robert had been struggling with feelings of inadequacy when Sara—and consequently, Malayaka—came into his life. That motherless baby was just as much the answer to his problems as he was to hers.

We can all look back on some moment in our lives, the split second when something of significance began, or ended. A pivotal moment. The time when our lives changed, for better or for worse.

For me, that moment was the day I met Robert; I knew my life would soon change. Three months later, I was on a plane to Uganda with my young daughter. I didn’t know why I was going to Uganda, nor what I would find there. But there was no question in my mind about whether or not to go. It was as if a previously unknown path had suddenly been illuminated. If I was a religious person, I would say that my prayers were answered that day. This book wouldn’t exist if my path hadn’t crossed with Robert’s that summer afternoon, six years ago.

This book is essentially a collection of interviews with people who have helped shape my understanding of the world, and thus, my place within it. Ironically, the very individual who helped me the most, and who has achieved more in his life than anyone I’ve ever met or will ever meet, is the one who had the toughest time writing about his own experiences. Finally, I told Robert he was off the hook. I emailed him to say that I would share his story so that he could concentrate on doing what he does best, helping people with real problems. I did, however, ask him if I could share his email response below, in order to illustrate that even a man who has saved hundreds of lives can struggle with insecurity.

Thanks, Amy. I am happy to be off the hook. You do so much for me that when you ask me to do something I take it very seriously and try to do it in the best way I can…I hope you know this. For some reason I am afraid to say anything. On one hand, I am lacking confidence and self-esteem, and on the other hand, I am just worried that I’ll write the wrong thing. Every time I try, I erase and criticize myself.

The above is an excerpt from Amy Carst’s book, Expand Your Bubble.

Focus on the Good

Ritah and Her Mom